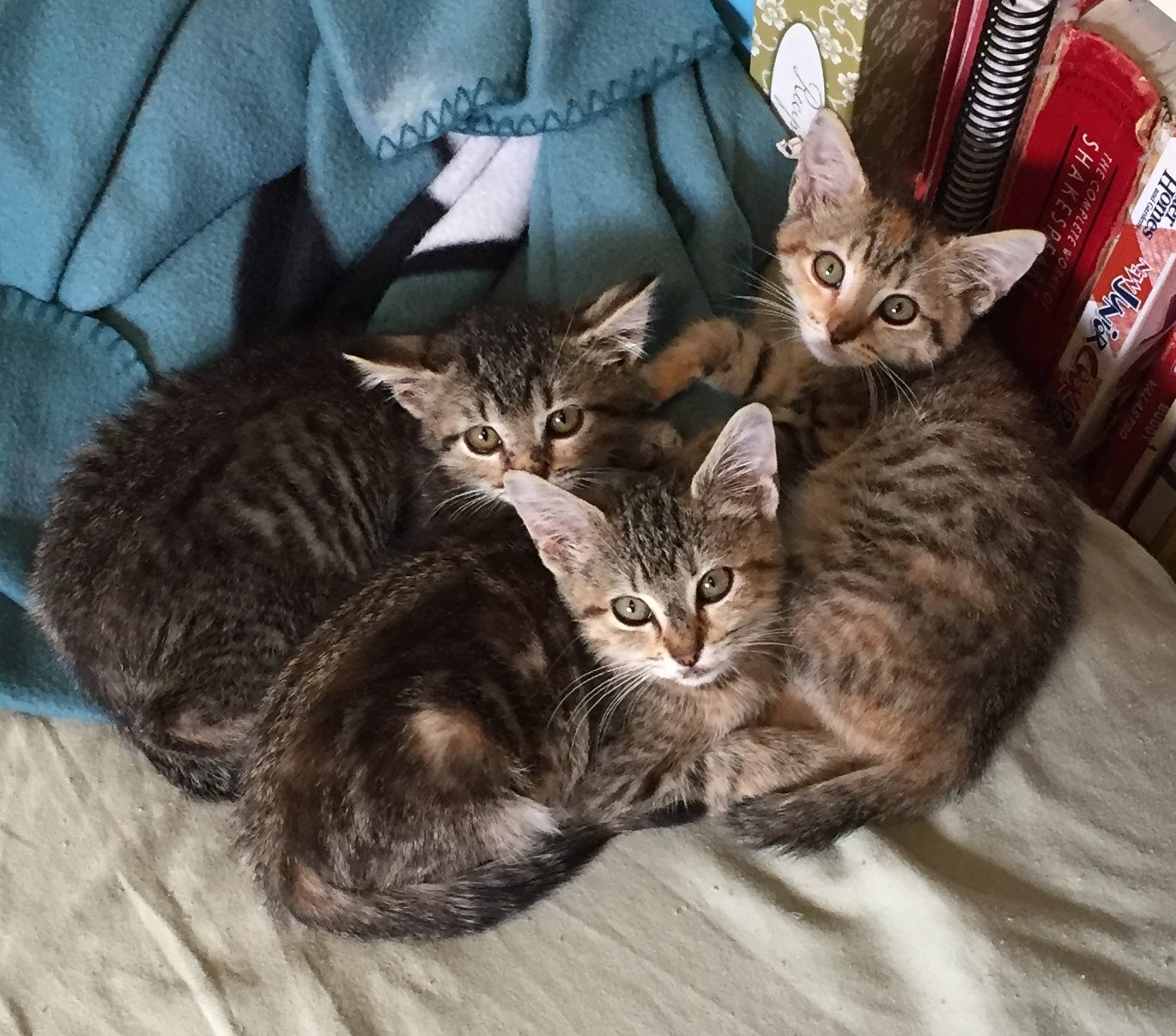 These three babies came to our house on August 10th. The same day we took the Puppy kittens back to the shelter to be adopted. They were very feral. They were found outside by someone and brought in. No one knows if the mom cat was near or not. To say that they did not like people would be a huge understatement. The little girl with the orange marking on her head was Taurus. We were given the other two names and told we could pick which one got each name. We named the little boy who was the shy quiet one Gemini and the girl who hissed, spit, and tried to attack us was Aries. Also, the name reminded us of Ares, and the god of war fit her personality.

About a week after we had gotten the kittens we figured out with help from a friend from the shelter that the kittens had ring worm. You can see it here very clearly on their noses. Ring worm sounds horrible and it is unpleasant but it can and does go away with proper treatment. The kittens were given a sulfur bath at the shelter and we were given oral medication for them and some topical ointment. Ring worm is just a fungus that is itchy and unattractive.

We did have to take precautions since we have two cats of our own. The foster cats always stay in the foster room and we would change into designated “ringworm clothes”, mostly pajamas that we would only wear in the kitten room. We used a hepa filter air cleaner in the room at all times, washed our hands and arms and clothes all the time and we would clean the room every few days with Rescue Spray and bleach. When I say clean the room I really mean it. We were very on top of it as we wanted to make sure the fungus would die and not spread to us or in our house.The cats did not at all like us giving them medication but we wrapped them up like little burritos in blankets, (known in the cat world as Purritos) so they would not scratch us. It mostly worked.

It took weeks for the kittens to trust us enough that we could hold them and they still did not like it. They would jump down from us at first and run away. Then one day they decided that being petted was kinda nice so after getting out of our arms they would come back to us and let us pet them. They would lean against us so we could scratch around ears and under chins and would purr very loudly. This was a huge step. We were elated. We still had to wrap them up for medicine once a day and one day Gemini decided my daughters arms were a good place and he fell asleep on her. That was a good day in the feral cat world.

After that day the others decided that we were ok and they came to us often to be petted and loved.They also were learning how to play during the time we had them. At first when we gave them toys they would just look at us. The wand toys they understood a little more as something to be chased and caught. After much effort on our parts they started to play. We made sure that they had every type of toy we could get them in spite of the fact that we knew we would have to discard some of them when the kittens were healthy.

We had the Zodiac kittens for six weeks. So we had lots of time to get to know them and their personalities. They were such sweet little serious kittens. Gemini liked to watch what everyone was doing. Once he learned how to play and got a hold of a toy it would be his. He loved ping pong balls. I think he loved the sound they make and that they moved very fast across the floor. He still loved one that got stepped on and had a big dent and would no longer roll, that just meant that he could carry it around in his mouth now. He loved wand toys and would wear us out playing until he was ready to sleep.  He also gets the award for the loudest purr ever.

Aries, oh baby. She was the strong fierce leader of her family. She was always in front and ready to confront any dangers real or perceived. One night I was trying to hold her and she was sort of letting me but then a loud noise scared her and she stuck all of her claws in me. I held her tight against me as that is what came natural for me at the time. Big mistake. She instantly started trying to bite and scratch me. When we finally got untangled my left hand was bitten, scratched and bloody. I tried to talk softly to her and let her know things were good but I really needed to go wash my hand. I am not to shy to say that I cried. It hurt really bad. Kittens can bite hard. My daughter came to help me and we got it all cleaned up and got antibacterial ointment on it. It was a bad night for me but it did not last long in a kitten mind. She was fine the next day.

The fun thing about Aries is how she went from such a wild little beast into a cat that wants nothing but love and to play. She did not want to be held but she wanted all of our attention on her and petting her. By the time she was ready for adoption she was a cuddler. Aries also loved a cute little toy that my son made years ago affectionately called a voodoo doll. It was just a first attempt to make a sock doll and to learn hand sewing. Aries would carry the tiny doll around in her mouth as she ran around the room. It was very cute. unfortunately that toy had to be thrown away as I could not guarantee that it was not fungus free.

All three of these kittens have short, beautifly colored, super soft fur. But Taurus has the softest. She is such a beautiful cat. Her striking patterns in her fur and the orange added into the tabby parts. Her eyes are the same color as her tan fur. She was also very brave and would come see what we were up to when we were doing room stuff like cleaning out the litter box or changing out the toys. She was the first to want me to hold her and stay while I petted her. She was gentle when she was playing with us and vicious playing with her siblings. It was fun to watch them run around and attack each other then curl up together to sleep.

Taurus was the first to be adopted from the shelter soon followed by a double adoption of Gemini and Aries. We are super happy for their new families and wish them love and happiness for years to come. We loved our time with these little babies and would do it all over again. I am super proud of how far they came and overcoming their fear of humans to let us love them.