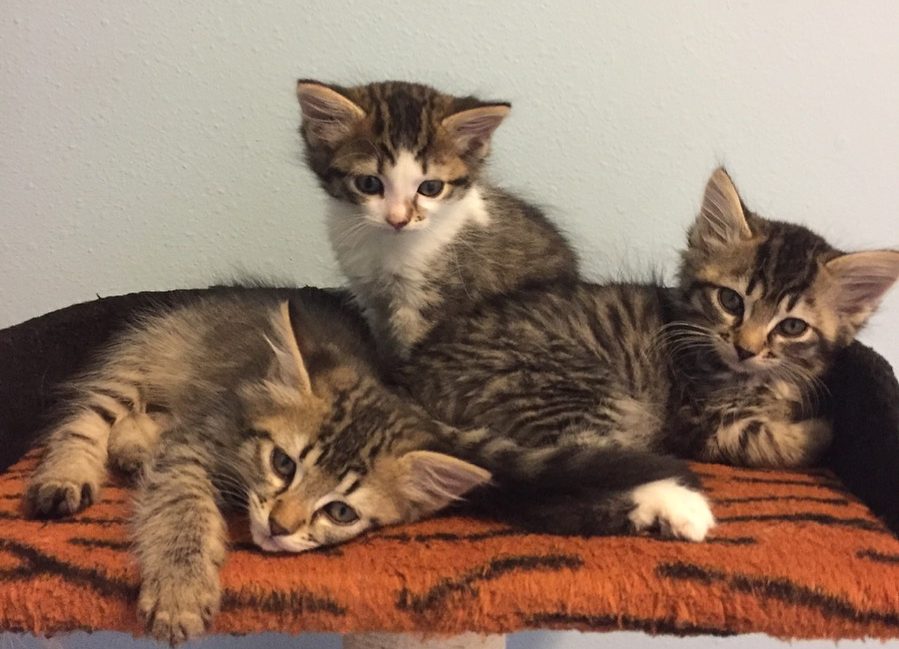 On September 14th we were bringing the Zodiac cats back to the shelter for a vet check and then we thought they would stay for adoption. The shelter got slammed that day with a large number of cats and kittens that were all sick from a hording situation. Our shelter is really great and run by people that really care and work hard and I admire them all very much. They also that day were brought a Mama cat and seven of her kittens.

They asked if we would like to take them and of course we said yes. I could not take them right away because I needed to go home and clean and sterilize the room that the Zodiacs had been living. It had to be and extra deep clean with lots of bleach and Rescue spay because the Zodiacs had had a small case of ring worm fungus. 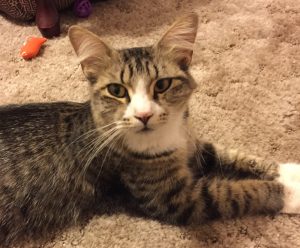 While I was at home cleaning I got a call from our shelter telling me that the Zodiacs needed to come back with us for ten more days. The vet just wanted to make extra sure that we had cleared up the infection. The new cats still needed a space.

I contacted my daughter who is in this endeavour with me 100%. She said that she really wanted the new kittens and Mom as it was something new to us and she was doing her community service senior project about her fostering experiences. She decided that ten days with the new cats in her room would not be that bad. So we called the shelter and told them we would take everyone. The Zodiacs went into the foster room where they would live the rest of their six week visit with us and the Punctuation Mama and babies went into my daughters room after a little reorganizing.

Dottie had been abandoned in an apartment by her owners with her kittens when the people just up and moved out and left them there. When someone from the apartments brought her in she was in a bad state. She was starving, thirsty and tired from taking care of her kittens for who really knows how long with out food and water or a clean litter box.

The shelter fed all of them and they were checked out by a vet before we brought them home. When we opened the crate to let them out they were all very shy and stuck by their Momma. Dottie saw the food we put out for her and raced over to it. She ate two cans of wet food a whole lot of kibble and drank and entire dish of water in one sitting. Then she found a private spot we had made for her to get away from babies and she took a few hours to sleep. She was very thin and continued to eat quite a lot.

She is such a good Mom. She always makes sure her babies are well and fed. She nurses them and bathes them and she is doing much better and gaining a little weight. 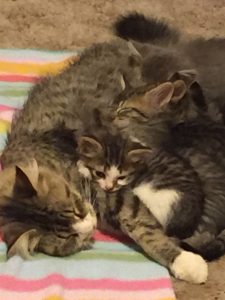 The seven kittens are of course very cute and full of personality. We did not know the name of the kittens until we had them for almost a week so we came up with our own names. The girls are Mickey, Minnie, Daisy and Lucy. The boys are Hewie, Louie and Dewey. The shelter has lists of names that they give cats and we were just not feeling those ones so we still call them by the names we gave them. I will have to post with the shelter names also to clear things up at adoption time.

We are loving having these little guys and it is really different to have a Mom cat. We pet her and tell her shes a good Mom and give her lots of love. She had lost much of her trust in people and did not like to be held much or petted for very long. She is a sweet cat and she is coming around to being loved more. Dottie we are told by the person who found them is her original name. She does not answer to it but will look over at you if you say Here kitty kitty.

I wish that there were not such people in the world that would sentence this little family to death by just leaving them. How long were they alone in there? Who would do that? It is better to have the humanity and decency to take the animals to the shelter than to leave them to die. Better yet, there are so many unwanted cats, if they had Dottie spayed then she would not have had more babies. She is about two years old so I am guessing if she was an indoor/outdoor cat that this could be her second litter. 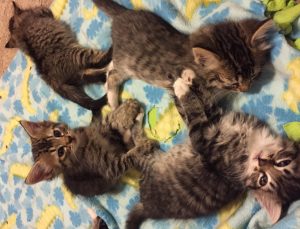 We love these kittens and if the most we can do is open our home to them and care for them for a few weeks until they are old enough to be adopted in to a forever home, then that is what we will do. I promised Dottie that she would have a better life. No more babies and a family that will love and appreciate the beautiful, strong, loving girl she is.

There are so many animals that we as a community need to step up and help. I will write more about this little family and I will also do at least one post on each of the past litters that we have had the honor of taking care of for our shelter and community.